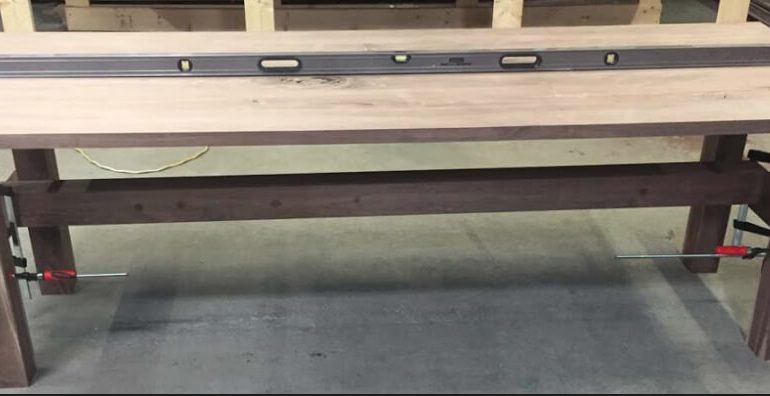 I have recieved many emails and questions about the black walnut table I worked on in Holmes+Holmes season 1. It all started with the idea to build something using my carpentry skills for Lisa, but it became so much more. Although we were very busy working on building the second story addition for the house, I still wanted to find the time to build a piece of furniture. I wanted something that we could use to create a lot of memories for years to come. The perfect place to start was with a brand new dining room table. The easy part was coming up with the idea – the hard part was yet to come.

Choosing the design of the table is always a tough part.Thousands of ideas went through my mind of what I wanted to build. After all, we would enjoy this table for many years to come. After drawing up a number of different designs I figured I should decide on the materials we would use. I thought by seeing the lumber it might help make the design decision a little more easily.

I have a very creative mind, and sometimes that’s a problem!

After discussing the design ideas with Derek and Robbie, Derek had mentioned that he knew where we could get some beautiful, rough sawn black walnut wood for a pretty good price. We decided to take a little road trip out to go take a look at what we might be working with. 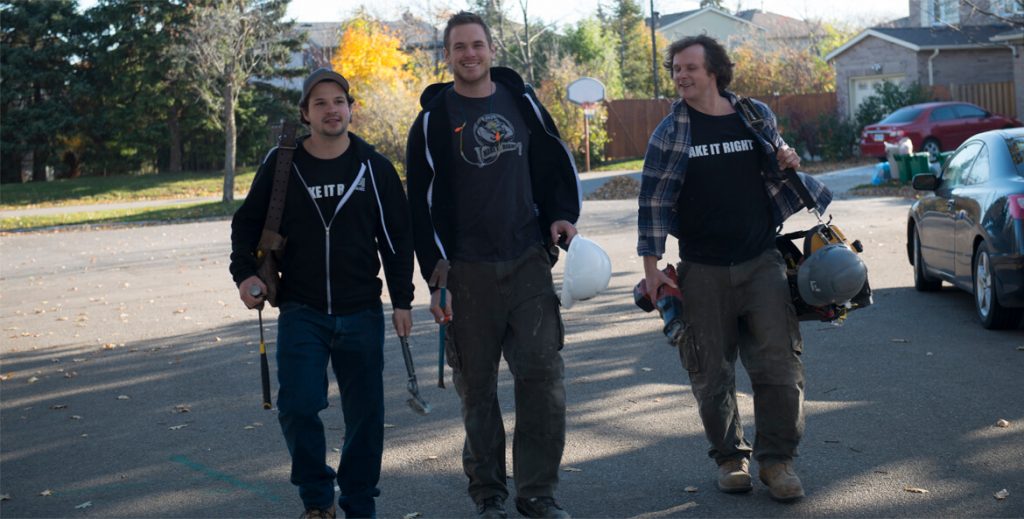 On the way, Derek explained he knew of this material through the family of a former boss of his. Brent and Pat, he described, had fallen on some hard times recently, in regards to Brent’s health. It was a real shame to hear, as Derek had only good things to say about them. We weren’t sure if Brent would be well enough for a visit while we were there, but I hoped to have the chance to meet him.

When we got to the property, we met with Derek’s old boss, Carlos. He brought us down to the barn and showed us the rough sawn black walnut wood. The wood had fallen into a state of neglect, so it was hard to tell what kind of shape it was in. Knowing that it was rough sawn wood, we would have a lot of work to do to get it into working condition, but we knew it was the wood we wanted for the table.

hile we were loading the truck, we spotted Brent leaving the house, so Derek jumped out to say hello. Brent was very smart and quick witted – you’d never be able to tell he was having health concerns.

Brent told us the story of the black walnut wood and how he acquired it. He had an office in town where two old black walnut trees stood tall. He talked to the city about cutting them down and milling them up to use for woodworking but the city wouldn’t allow it. One day, a lightning storm struck the two trees, bringing them down. That’s when Brent had the wood milled.

He continued to tell us that in the 30+ years that he’s had this wood, all he’s ever wanted to do was build a dining room table for his family. He was quoted around $15,000 for the build, which Brent thought was ridiculous, as he already owned the materials. He declined the project and the wood sat untouched for years. It was at that moment Derek, Robbie, and I looked at each other without saying anything.

This table was no longer for Lisa and I – we had to build Brent the table of his dreams.

It was time to come clean with Lisa. I told her that I wanted to build us a table but this opportunity seemed like fate. She said “we have the rest of our lives to build something like that for us”. She wanted that table to go to Brent and Pat as much as the rest of us. 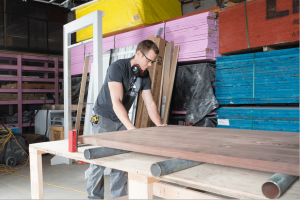 We had the wood, but we had a problem: we didn’t have the right tools to properly dress the lumber. The huge slabs of lumber that we had would take forever to dress with our jack and block planes, so we knew we had to invest in some new equipment.

We reached out to King Canada and shared Brent’s story with them – and they were more than happy to help out. We went through the catalogue of tools and circled each and every piece we needed. It was like going through the toy catalogue when we were kids!

It was like Christmas morning at the shop when our new tools arrived, They sent us an industrial size table saw, 15” planer, 8” Joiner, 17” ban saw, drill press, and a dust collector system to keep our work shop clean. We set it all up as fast as we could with the help of our electrician, Frank Cozzolino.

Once we were set up, the only thing left to do was to dress the wood. As we dressed the wood we began to work out the final design for the table.

We had so much work to do on the house, so this table build took up a lot of our time on nights and weekends. Most of my focus went to the table top where I routered the hidden mortise and tenon for the breadboard.

Derek spent a lot of his time working on the legs while Robbie bounced back and forth helping both of us. We were all able to help with all aspects of the table in the end. The last thing to do was deliver it home.

Rise and shine! 6am came fast on Monday morning, and the time had finally arrived to take this table home. This was meant to be a surprise, so we told everyone that we needed to grab some more footage for the show. We set our crew to distract the family while Derek, Robbie and I went to the barn to unload the table.

Once major setup was complete, Derek collected the family, while Robbie and I waited with our hearts beating out of our chests.

Brent and Pat arrived and saw the table and we explained to them why there was a brand new black walnut table sitting in their barn.

Their face showed their confusion at first, but we slowly watched the reality set in. Their reactions were so heartfelt, it was all the pay we could have asked for and more. They were so touched by our gesture and couldn’t believe we had done this for them. This is what my job is really about – giving back. Best of all, you couldn’t find a more deserving family if I tried. 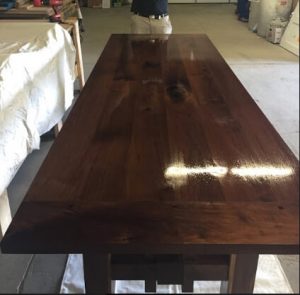 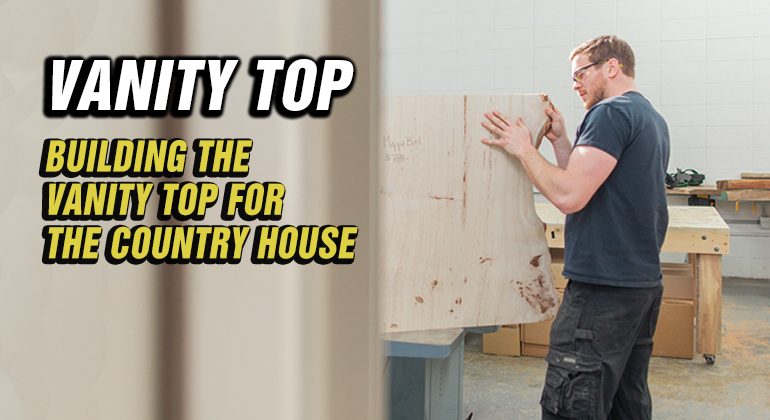 Building The Vanity Top For...

I love doing things differently, and sometimes that can be tough for my dad to... 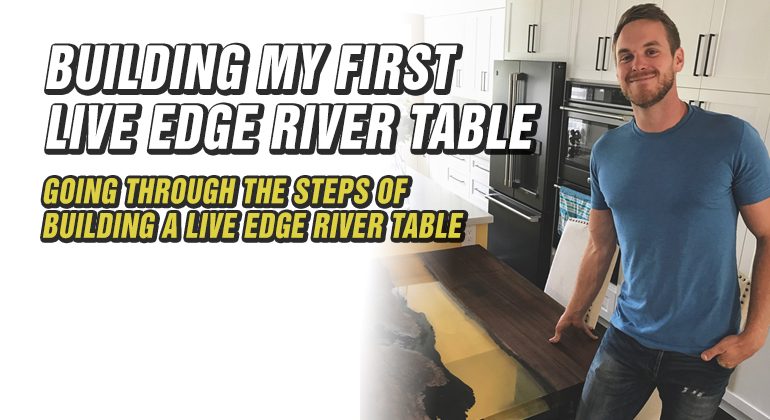 I am a carpenter by trade and have worked on many projects over the years,... 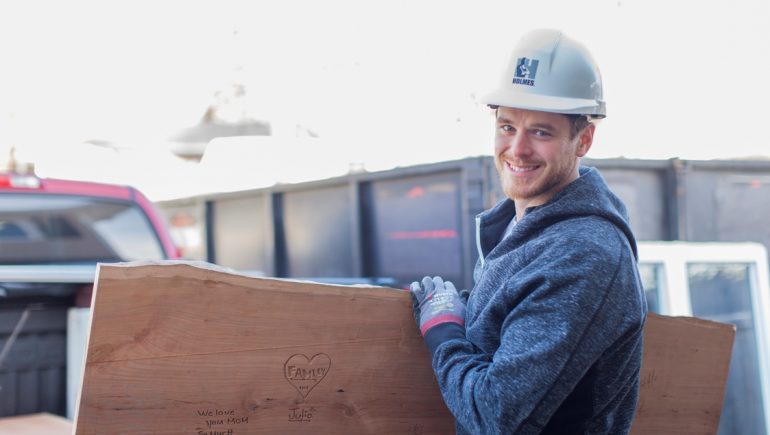 « PREVIOUS Mike’s Tips To Planning A Reno Right NEXT » Are you air aware? How to bring good quality back to your indoor air – by Mike Holmes Jr.